Are You Ready for the Total Solar Eclipse 2024?

There is something very special about a total solar eclipse. During this time, the the moon will move in front of the sun. This will cost the sun's rays to be blocked from view. For anyone that is in the path of totality, it will mean dusk-like conditions, likely in the middle of the day, and usually only for a few minutes. Due to tge brevity of the event, you need to be prepared, or you could miss it! Here are a few things that you need to know before the total solar eclipse 2024!

Where to Buy Eclipse Glasses Now

demystified the phenomenon of an eclipse has become, witnessing the event is no less magical than it was thousands of years ago. The best thing about viewing a solar eclipse now is that we finally have the tools necessary to safely view the event.
Read More

Common Solar Eclipse Mistakes and How to Avoid Them

Solar eclipses are exciting events, and it is a good time to get together with friends and family. It is important to get your glasses for solar eclipse ahead of time. Also, mistakes and accidents can happen and when you avoid those things, you will have a safer, more enjoyable experience. Here are some common mistakes you should consider avoiding.

Where the Heck Did All Those $2 Paper Eclipse Glasses Come From? Meet the Guy Who Made 40 Million, Just in Time

On August 21, John Jerit will not be kissing his sister.

August 21, of course, is the date of the solar eclipse, which will cut a swath from Oregon to South Carolina. Those not positioned to see the event at 100 percent might as well be smooching their sibling, according to Jerit, founder and CEO of American Paper Optics, located just outside of Memphis. But in the Memphis area, the view is just 94 percent, so Jerit plans to motor three hours to Nashville to enjoy the full lunar Monty. "If you get to Nashville it will be like experiencing a night of passion with the person that you most want to be with in your life," says Jerit. "It will be an 'Oh my God' screaming and crying and cussing moment."

For Jerit, awe of the natural is mixed with gratitude for the commercial. American Paper Optics is the nation's largest maker of paper 3-D glasses: more than 2 billion pairs incorporated into magazines, kids' meals, theme park rides, and Blu-ray movies.

The company also specializes in eclipse glasses that protect viewers' eyes from ultraviolet radiation. The first total eclipse visible across the nation since 1918 will roughly double the company's 2017 revenues, from $7 million to almost $14 million. Unlike most of American Paper Optics' products, which are given away in promotions or packaged with DVDs and toys, the eclipse glasses are being sold in stores and online, for $2 a pop.

Jerit expects to sell more than 40 million eclipse glasses, which incorporate a filter that reduces sunlight to safe levels. He has made glasses emblazoned with the names of companies, schools, and charities, as well as glasses attached to aliens' heads, astronaut helmets, and cowboy hats.

Over 25 years, David Burder has sold tens of millions of American Paper Optics products through his company, 3D Images, England's oldest supplier of all things 3D to the commercial marketplace. "They have never missed a deadline, despite some ridiculously short lead times," says Burder. "They are always on the lookout for novel technology and have invested heavily in buying exclusive licenses."

John Jerit grew up around spectacle. His father designed theaters: everything from high-school auditoriums to performance arts centers. As a kid in Memphis, Jerit often saw shows in spaces created by his dad. Even back then, "I had a little carny in me," he says.

That trait helped Jerit land a job selling sparklers and rockets by the side of the road for the American Fireworks Company. He started the summer before college and worked his way up to vice president. In 1987, a small holographic business sent his boss and mentor, Dale Wilson, a pair of paper glasses with diffraction lenses that create a rainbow effect at light shows. The business thought American Fireworks could market them to consumers playing with sparklers in their backyards.

Wilson wasn't interested. But Jerit, who fished the glasses out of the garbage, was. He bought a batch of paper diffraction glasses and sold 7,000 pairs in four hours at a fireworks show in Memphis. Over the next year, Jerit made periodic trips to peddle glasses around the country.

From science to slashers

The glasses cost Jerit 25 cents apiece; he priced them at a buck. Making them, he knew, would be cheaper. So he teamed again with Wilson to buy equipment, and they started manufacturing out of the fireworks plant. In 1990, Jerit bought out Wilson and moved American Paper Optics to a small shop in Memphis.

The company's first nine months were brink-of-death rocky. Then came a call from an astronomer. A total eclipse was projected for July 11, 1991. The astronomer had created a protective filter for vulnerable retinas. Could American Paper Optics glue the filters into frames for sale in Hawaii and South and Central America, where the eclipse would be visible?

Why sure, said Jerit. Also: Can we pay you a royalty to make and sell eclipse glasses ourselves? American Paper Optics produced several hundred thousand glasses for the astronomer. It sold a million to Corona Beer, for distribution to eclipse partiers in Mexico. "That sale gave me the capital to stay alive," says Jerit. "And it showed me what was possible."

There goes the sun

Soon 3-D was blowing up. And American Paper Optics was everywhere. It made glasses for the Sports Illustrated swimsuit issue, the Discovery Channel's 3-D Shark Week, and even a Super Bowl commercial. If you bought a 3-D DVD or Blu-ray movie, chances are American Paper Optics glasses came with the case.

But slowly the buzz grew less buzzy. Revenues, which peaked at $20 million in 2010, dropped more than half.

Then, in 2015, Jerit learned the eclipse was coming, and would be viewable in the U.S. At once he created an eclipse-dedicated website and started designing new frames. He commissioned a retired NASA astrophysicist to write a book on the subject. (Walmart is stocking a quarter million copies.) He hired a PR firm.

Jerit doesn't expect sales to stay at this level after August 21. But he hopes to retain some momentum. The company is already backed up on orders for glasses designed to view Christmas lights. Telescope makers have learned about the business, offering a new market for promotional products.

"It is nice to have this pop, but this is a great business, whether it is $7 million or $20 million," says Jerit. And there's hope: The next total solar eclipse in the United States is just seven years away. "We are already thinking about 2024," he says.

BARTLETT, Tenn. (AP) — Millions of eyes will be fixed on the sky when a total solar eclipse crosses the U.S. in August, and it’s likely many of them will be safely behind the special glasses churned out by a Tennessee company.

American Paper Optics ramped up production for this year’s eclipse and expects to make 50 million paper and plastic eclipse glasses. John Jerit, the company’s CEO and president, said they began preparing about two years ago. During his almost 27 years making safety glasses, he’s only seen one total solar eclipse, in France in 1999, but will be going to Nashville for this one.

Millions of eyes will be fixed on the sky when a total solar eclipse crosses the U.S. in August. It’s likely many of those eyes will be safely behind eclipse glasses made by a Tennessee company, one of many businesses cashing in on the eclipse. (July 27)

“It’s a life experience,” Jerit said during an interview at his company’s office in the Memphis suburb of Bartlett. “When that two minutes is over, or however long you’ve got, the question that you really want to hear is, ‘When is the next one?’”

His company is one of many businesses — hotels, campgrounds and stores — taking advantage of the total solar eclipse — when the moon passes between Earth and the sun. The moon’s shadow will fall in a diagonal ribbon across the U.S., from Oregon to South Carolina. The rest of the U.S. will experience a partial eclipse, along with Canada, Central America and a bit of South America. 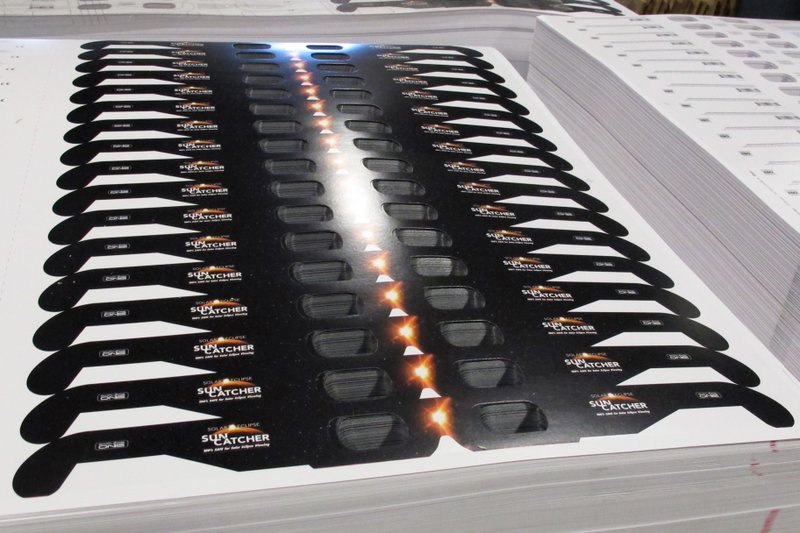 Cities and towns along the path of totality — where there will be about 2 ½ minutes of darkness — are gearing up for the crowds. St. Joseph, Missouri, population 76,000, is in a prime location and officials are bracing for tens of thousands of eclipse watchers to descend on the city, said Beth Conway, spokeswoman for the St. Joseph Convention & Visitors Bureau.

The city’s restaurants, gas stations and stores are preparing for the onslaught — the city’s largest arts and music festival with the nickname “Total Eclipse of the Arts” is scheduled on the weekend leading up to the eclipse on Monday, Aug. 21.

“This is essentially our Super Bowl,” Conway said. “If we see anywhere near the amount of people that they’re telling us, it will probably be the biggest event in our history.”

The city has gotten into the act as well, selling eclipse glasses, posters and blue and yellow T-shirts decorated with a drawing of the city’s skyline and an iconic railroad bridge, and with the slogan “Right in the Middle of it All.”

Conway said a benefactor donated 100,000 safety glasses designed for the city and proceeds are going to local museums and charities.

Sales have been “amazing, phenomenal,” she said. “It’s just blown our minds.”

At the Tennessee factory, a constant whirring sound fills the factory as large sheets of paper are fed into machines. One cuts out the eyeholes in the pre-printed frames, another inserts the protective film lenses. Then the glasses are punched out of the sheets and packaged.

About 50,000 glasses can roll off the assembly line per hour, Jerit said. Paper glasses cost about 20 to 25 cents to make, and they are sold to distributors for about 45 cents, but prices vary depending on order size. They’re sold retail for about $2. The plastic versions are about $15.

Staring at the sun during an eclipse — or anytime — can cause eye damage. The only safe way is to protect your eyes with special filters in glasses or other devices. NASA lists four companies, including American Paper Optics, whose glasses meet international standards. 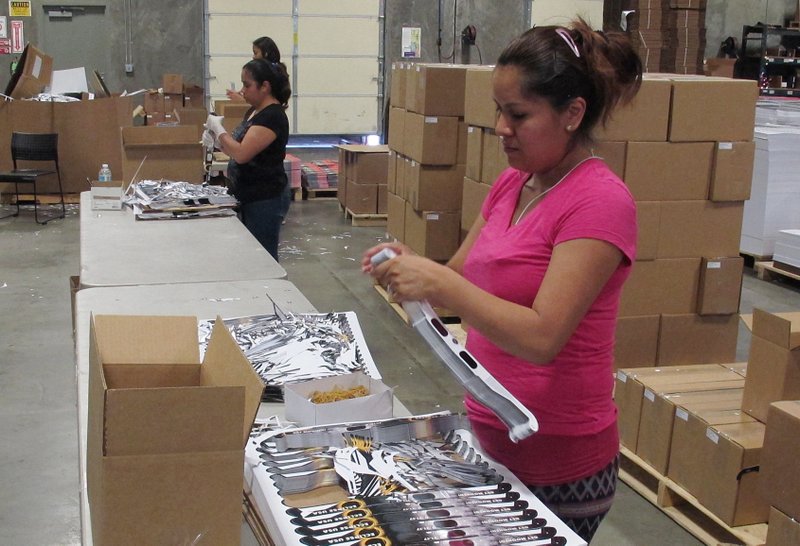 Besides retail outlets, the company sells the glasses to cities, universities and space-related entities like NASA and the Adventure Science Center in Nashville. Some are custom-designed, like the ones for St. Jude Children’s Research Hospital which are decorated with children’s drawings. Under the wacky category: glasses to make the wearer look like an astronaut, space cowboy or a green alien.

Green Acres farm near Casper, Wyoming, is one of the many farms and parks welcoming eclipse watchers. The farm, which normally features a corn maze and other children’s activities, has been turned into a campground with 300 campsites in prime eclipse viewing territory.

“We have people coming from Australia, Belgium, several from Canada. I have a guy from England coming that’s seen 17 eclipses,” said manager Dwain Romsa. “We’re a little more remote than some areas. It takes more effort to travel here.”